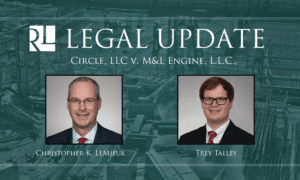 A Contract Deadline Without a Penalty Provision Has No “Teeth.”
Authors: Christopher K. LeMieux and Trey Talley

The Fourth Circuit recently ruled that if there is no penalty provision for the late delivery of a supplier’s materials to the jobsite, the late delivery only amounts to a default (not a breach) of the contract, which does not allow a contractor to withhold payment for damages caused by the delay.

Circle, LLC v. M&L Engine, L.L.C. arises out of a construction project in Lafourche Parish,
Louisiana. Circle contracted with Lafourche Parish to perform certain drainage work, including
the installation of pumps, and M&L Engine was to provide pump equipment to Circle for the project. A dispute ultimately arose when the manufacturer of the pump equipment, Lo-Lift, experienced a delay in the shipment of the pumps. Circle withheld money from M&L, M&L suspended its work on the project, and Circle filed suit. After the district court granted M&L’s Motion for Summary Judgment related to the open account, Circle appealed.

A key takeaway from this case for contractors is to always include a late delivery provision in purchase orders with suppliers. This provision will provide the subcontractor with a predetermined remedy in the event that the suppler fails to deliver the materials on time. Additionally, this case should be a warning to all contractors (and owners) that a delay may be a default but not a breach; and if the contract is silent as to the penalty for such delay, the Contractor or Owner cannot withhold payment, even after the default.