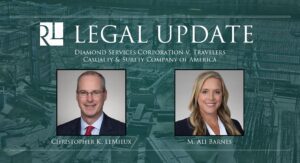 Knowing the Statute of Limitations for Filing Claims On a Surety Bond is Vital.

Knowing when to timely file a lawsuit for claims made on surety bonds is vital, as illustrated in the case of Diamond Services Corporation v. Travelers Casualty & Surety Company of America. In Diamond Services Corporation, the U.S. Court of Appeals for the Fifth Circuit affirmed the dismissal of a suit for damages under the Miller Act, as entered by the U.S. District Court for the Southern District of Texas.

The U.S. Army Corps of Engineers awarded a contract for dredging work along the Gulf Coast of Texas to T.W. LaQuay Marine, LLC (“LaQuay”). In compliance with the Miller Act, 40 U.S.C. § 3131, LaQuay obtained a surety bond from Travelers Casualty and Surety Company of America (“Travelers”). On March 24, 2020, Diamond Services Corporation (“Diamond”) performed repair work on a vessel chartered by LaQuay for use on the dredging project. When LaQuay did not pay Diamond for the repair work, Diamond submitted a claim on the surety bond to Travelers. Travelers sent a claim form and letter requesting additional information Diamond on January 7, 2021. Travelers eventually denied the claim on March 26, 2021. On March 29, 2021, Diamond subsequently filed suit in the U.S. District Court for the Southern District of Texas, one year and five days after completing the repairs, seeking damages under the Miller Act and the Travelers security bond.

The district court dismissed Diamond’s claim under Federal Rule of Civil Procedure 12(b)(6), finding that the claim was barred by the statute of limitations, and further holding that the doctrine of equitable estoppel did not apply. The district court reasoned that, under the Miller Act, an action on a surety bond must be commenced “no later than one year after the day on which the last of the labor was performed.” Therefore, in order to maintain its suit, Diamond was required to file suit no later than March 25, 2021, or one year and one day after March 24, 2020 – the day Diamond performed the repair on the LaQuay chartered vessel.

Diamond agreed that it filed suit 4 days late but argued that Travelers’ January 7th letter, representing an investigation into the claim, should have allowed Diamond’s claim to survive the expiration of the statute of limitations under the theory of equitable estoppel. The district court and 5th Circuit disagreed, finding that Diamond failed to plead that the January 7th letter was a representation upon which Diamond reasonably relied in deciding not to bring suit within the statutory limitations period. Diamond’s failure to know the deadlines imposed via the statute of limitations for filing its suit on the surety bond resulted in a total dismissal of Diamond’s claim.