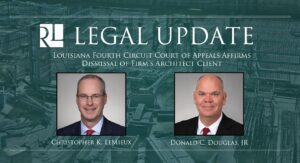 The lawsuit at issue arose from a hotel development in the warehouse district of New Orleans. The Owner entered into a standard AIA form A101 Contract with the General Contractor, and a separate AIA form B101 Agreement with the Architect.

The General Contractor appealed the dismissal. The Louisiana Fourth Circuit Court of Appeal affirmed the dismissal of the Architect, relying on the integration provisions contained in both of the contracts. The Court of Appeal noted that while tort claims could possibly exist between the Architect and the General Contractor, the integration provisions precluded any contract-based claim from being asserted. The General Contractor also tried to convince the Court of Appeal that it should be allowed to bring a detrimental reliance claim against the Architect. The Court of Appeal rejected this argument as well, finding that to the extent any detrimental reliance claim had arisen in tort, it was prescribed. Further, as the contractual documents contained the integration provisions, the court held that such contracts precluded a detrimental reliance claim to the extent that it sounded in contract.

This success for the firm’s client also highlights the importance of filing tort claims timely regarding issues that arise on construction project between parties that are not in contract with one another. Otherwise, such tort claims may be prescribed.