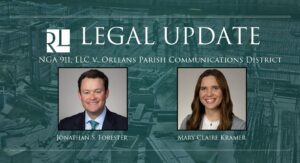 In NGA 911, LLC v. Orleans Parish Communications District, the Louisiana Fourth Circuit
Court of Appeal found that a request for a preliminary injunction based on a Louisiana Public
Bid Law violation cannot be issued absent a showing that the contract is governed by the Public
Bid Law.

Orleans Parish Communications District (“OPCD”) signed a contract with AT&amp;T to modernize
the emergency communication structure. Shortly after, NGA 911 (“NGA”) filed a petition for
preliminary and permanent injunction and declaratory judgment to nullify the contract between
OPCD and AT&amp;T, alleging that OPCD violated Louisiana Public Bid Law by awarding a public
contract to AT&amp;T without a competitive bid.

The trial court granted NGA’s petition for a preliminary injunction, prohibiting OPCD and
AT&amp;T from proceeding with their contract until the court ruled on the petition for permanent
injunction and declaratory relief that NGA filed. OPCD appealed the judgment asserting two
assignments of error: first, that the court erred in granting NGA’s request for preliminary
injunctive relief, and second that the trial court erred in finding that the AT&amp;T contract is subject
to the Louisiana Public Bid Law.

Ultimately, the Fourth Circuit agreed with OPCD, finding that under well-settled law, a
preliminary injunction may only be issued if NGA can make a prima facie showing that it will
prevail at the trial on the permanent injunction. However, without establishing that the AT&amp;T
contract was governed by Louisiana’s public bid law, NGA cannot meet the burden of proof to
be entitled to an injunction. In this matter, the Fourth Circuit held that the lower court must first
determine whether the AT&amp;T contract was a contract for a public work, which would be
governed under Public Bid Law, or a public service contract, which would not.

Contractors need to be aware that not all public contracts fall under the Louisiana Public Bid
Law. Therefore, one who is protesting a bid must make sure to prove that the contract at issue is
governed by the Public Bid Law, as public service contracts are not.