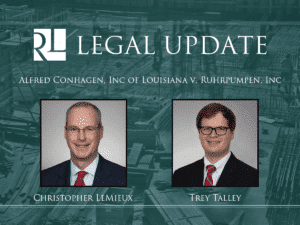 Subcontractors and suppliers have a duty to provide accurate quotes and warn of price increases, and Contractors can rely on those quotes.

In Alfred Conhagen, Inc. of Louisiana v. Ruhrpumpen, Inc., the Louisiana Fourth Circuit Court of Appeal addressed this exact issue, ultimately ruling that subcontractors not only owe a duty to accurately quote the cost of materials to any contractor or owner that relies upon the quote, but the subcontractor also owes a duty to advise of changes in the price after the initial quote is given.

Conhagen filed suit against Ruhrpumpen for negligence and detrimental reliance and against Nelson for negligence. In coming to a decision, the Fourth Circuit used the factors set forth by the Louisiana Supreme Court in Barrie v. V.P. Exterminators, Inc. to determine that Ruhrpumpen had a legal duty to supply the correct price information to Conhagen. The Court further found that Ruhrpumpen breached that legal duty by grossly misrepresenting the pricing information and failing to inform Conhagen of price increases after receiving additional information to that effect. The Court also found that Conhagen’s reliance on the grossly incorrect quote was justified and caused harm to Congahen.

Likewise, the Court found that since Nelson was hired as the engineer whose role evolved into reviewing bids and vetting pricing, Nelson had a duty to accurately vet the price quotes and advise Conhagen of any concerns or discrepancies. Nelson breached its professional duty to warn Conhagen of the potential price increase, and the Court therefore found Nelson to be negligent.

For these reasons, the Court ultimately affirmed the trial court’s judgement finding both Ruhrpumpen and Nelson to be negligent. Importantly, however, the Court noted that since Ruhrpumpen and Nelson had the same duty – each were obligated to provide an accurate quote to Conhagen – the obligation was indivisible and therefore resulted in both being solidary obligors, since the performance of either one would have satisfied the obligation of the other. The Court noted that in the case of solidary obligors, although either obligor can be held liable for the whole amount, the courts must still apportion fault to all parties pursuant to the Louisiana laws of comparative fault. Since the trial court failed to apportion fault between the parties, the Fourth Circuit found clear error and amended the trial court’s judgment to apportion 80% fault to Ruhrpumpen and 20% fault to Nelson.

Price escalation in today’s market is quite prevalent. From this case, it is clear that both subcontractors and materials providers have an ongoing duty to not only provide accurate price quotes at the outset, but to advise of price changes throughout the course of construction projects.  If they do not, Contractors who rely upon those quotes are entitled to reimbursement for the price increase.