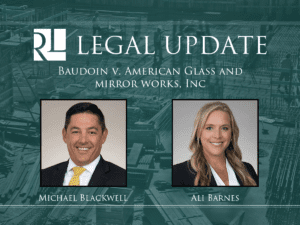 Contractors — Do You Know What is in Your CGL Policies?

Baudoin stems from a subcontractor’s injury on a construction project in Breaux Bridge, Louisiana. The plaintiff, Mitchell Baudoin (“Baudoin”), was installing flooring as a subcontractor of Charles Goudeau d/b/a Charles Goudeau General Contractor (“Goudeau”), when he was struck by a vehicle on the project site. Baudoin filed suit against Goudeau and his insurer, Accident Insurance Company (“AIC”), seeking to recover for the injuries he sustained.

The CGL policy at issue contained an exclusion for injury to employees, contractors, and employees of contractors. The trial court held that the “Employees and Contractors exclusion” was ambiguous, relative to Baudoin’s role on the job – i.e., there was ambiguity as to his classification as an employee, contractor, subcontractor, or independent contractor. However, AIC’s argument as to the policy endorsement was found to have merit.

The AIC policy further contained an endorsement, which required Goudeau to perform certain conditions precedent to obtaining coverage, namely, obtaining requisite documents from Baudoin in the form of written indemnity agreements, certificates of insurance from Baudoin naming Goudeau as an additional insured, and proof of workers’ compensation insurance from Baudoin, prior to the commencement of any work on the project. It is undisputed that the requisite documents were not obtained. AIC filed a motion for summary judgment, arguing that the commercial general liability (“CGL”) policy issued to Goudeau contained both a policy endorsement and exclusion which precluded coverage for Baudoin’s injuries. The trial court granted AIC’s motion for summary judgment, agreeing that the terms of the policy endorsement were not met, rejecting the claim that La. R.S. 9:2780.1 should nullify the terms of the policy endorsement. The trial court and Third Circuit upheld the denial of coverage based upon Goudeau’s failure to comply with the terms of the CGL endorsement. Both the trial court and the Third Circuit further agreed with AIC’s contention that the requirement that Goudeau obtain additional insured status under any subcontractors’ insurance policies was lawful, and not in violation of La. R.S. 9:2780.1.