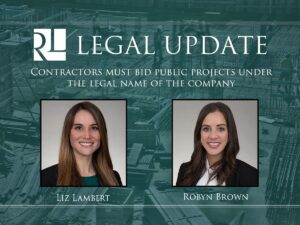 Summary: Contractors must bid public projects under the legal name of the company.

In Lathan, the City of Gonzales (“the City”) advertised for bids on a demolition project pursuant to Louisiana’s Public Bid Law, La. R.S. 38:2211 et seq. which required the work be performed by a properly licensed and certified contractor. A bid packet was submitted by Lathan Construction through its owner, Willie Lathan. The City notified Lathan that it was potentially the lowest bidder. However, after additional legal review it was determined Lathan’s bid was nonresponsive and Lathan was not awarded the contract.

Willie Lathan submitted a bid form which listed his personal name as the name of bidder on the mandatory Bid Form. However, Lathan Construction, LLC, the entity that was licensed as a contractor, was not identified on the Bid Form.

Lathan argued that because Willie Lathan was the sole owner, he had authority to sign and submit the bid.  However, the Court found that argument unpersuasive. The Court held that Mr. Lathan was not the person “licensed, or registered by the board to bid, contract and perform work” and Lathan Construction as a separate juridical entity is the only person licensed by the Licensing Board for contractors and the only person permitted to be identified as bidder on the form. Therefore, the Court upheld the lower Court’s ruling and found the bid was nonresponsive.

The Court reasoned that because Louisiana Public Bid Law curtails the discretion of the City, the City had no authority to take any action inconsistent with the bid law.

As shown by the First Circuit’s analysis, the Court has underscored the importance of strict adherence to bid specifications.