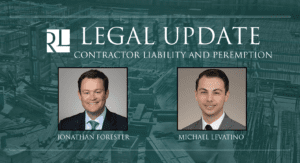 LA R.S 9:2772 Applies To Insurers And Fraud Claims Under The Statute Must Be Heard Prior To A Contractor’s Exception Of Peremption

The First and Third Circuit Louisiana Court of Appeal recently addressed issues surrounding the five-year peremptory period found in the contractor liability statute, La. R.S. 9:2772.  In Daxtreme, Inc. v. Lafayette City-Parish Consolidated Gov’t., 2021-418 (La. App. 3 Cir. 12/15/21), 2021 WL 5913457, the Third Circuit Court of Appeal, clarified that the Contractor Liability statute’s five-year peremptive period applies to the insurers of contractors.  In Whitney Bank v. Henry Rayford, 2021-0406 (La. App. 1 Cir. 12/9/21), 2021 WL 5833269, the First Circuit Court of Appeal held that allegations of fraud, which are an exception to the five-year peremptive period under La. R.S. 9:2772(H), shall be tried separate from and prior to the trial of any and all other matters.

In Daxtreme, Inc. v. Lafayette City-Parish Consolidated Gov’t., the Lafayette Consolidated Government (“LCG”) hired a landscape architect firm, Sasaki, to execute professional services at a project. The parties entered into an agreement in which Sasaki agreed that LCG would be named as an additional insured in Sasaki’s commercial general liability policy. Twenty-two years after the work was performed, LCG noticed that the trees planted by Sasaki started to cause damage to a nearby building. The building owner filed suit against LCG for damages. Subsequently, LCG filed a third-party demand against Sasaki’s insurer for defense and indemnity. The insurer filed a motion for summary judgment citing that the agreement entered twenty-two years ago was perempted five years from the date of acceptance of the Project, including Sasaki’s alleged duty to name LCG as an additional insure. The trial court granted the motion.

LCG appealed the ruling arguing that La. R.S. 9:2772 does not mention either insurers or claims regarding additional insureds. Thus, LCG claimed that the statute only applies to persons performing professional services, such as Sasaki, and not insurers. Further, LCG stated that it was not seeking contractual defense and indemnity under the Agreement with Sasaki but is instead seeking additional insured status from the insurer. The insurer argued that the five-year peremptive period found in La. R.S. 9:2772 applies to third-party demands against a general contractor and its insurer.

The Third Circuit Court of Appeal held that the five-year peremptive period applies to insurers and enforcement of obligations under the agreement are perempted. The Court reasoned that peremption is not a defense that is personal to the insured. The insurer has the right to assert peremption as a valid defense. The Court further noted that although the agreement required LCG to be named an additional insured, that obligation was perempted by the passing of time. It had been twenty-two years since the agreement was executed. The court stated that LCG was only entitled to defense and indemnity if it qualified as an additional insured under the insurer’s policy. Thus, the Court held that any obligation Sasaki had to name LCG as an additional insured under the agreement extinguished by the passage of five-years from the date LCG accepted the project in 1997.

In Whitney Bank v. Henry Rayford, Mr. Rayford defaulted on his promissory notes that financed the construction of three houses. The bank filed suit against Mr. Rayford for the default. Mr. Rayford subsequently asserted a third-party demand against the Contractor, who built the three houses, alleging construction defects that caused hazardous mold and mildew. The Contractor quickly filed an exception of peremption and prescription pursuant to Louisiana Revised State 9:2772, which provides a five-year peremptive period applicable to actions against contractors for the construction of improvements on immovable property. Mr. Rayford argued that the claim had not been perempted. Relying on La. R.S. 9:2772, Mr. Rayford alleged that peremption did not run when there were allegations of fraud against a contractor.

The trial court found the claims filed by Mr. Rayford had prescribed, dismissing his action against the contractor. Mr. Rayford appealed. On appeal the First Circuit found that the third-party petition had not prescribed on its face because it did not contain allegations indicating when peremptive or prescriptive periods commenced. Thus, the First Circuit remanded the case back to the trial court. Back at the trial court, Mr. Rayford argued that Section H of La. R.S. 9:2772 required a separate hearing regarding the allegations of fraud prior to a trial on all other issues. The court rejected that argument stating that “if there is a necessity for any issues regarding fraud or attorney’s fees, it will be handled at a future date.” Thus, the trial court dismissed Mr. Rayford’s third-party demand finding the claim was perempted. Mr. Rayford appealed the decision for a second time.

As discussed by the First and Third Circuit, the contractor liability statute clearly provides a five-year peremptive period to claims against design professionals and contractors. The First Circuit held allegations of fraud require a hearing on such claims prior to a hearing of the underlying construction claims.   As such, La. R.S. 2772(H) provides that allegations of fraud must be tried prior to a trial on any other issue including exceptions of prescription and peremption. Additionally, the Third Circuit clarified that the Contractor Liability Statute five-year peremptive period extends to a contractor’s and/or design professional’s insurer.