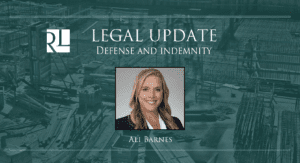 Is your additional insured clause valid?  In a recent decision, a federal district court held that a broadly worded provision in a construction contract requiring one party to procure insurance, at its sole cost and expense, and name another party as an additional insured is void under the Louisiana Anti-Indemnity Act, La. R.S. § 9:2780.1(C).

The case involved from a slip and fall at a bank in Metairie, Louisiana. The plaintiff sued JP Morgan Chase Bank, N.A. (“Chase”) alleging the bank’s negligence caused the accident and resulting injuries sustained from a fall over a sprinkler head.  The main issue in the case revolved around a third-party complaint filed by SMS, a subcontractor hired to maintain and inspect the sprinklers at the bank, against AMR, an entity hired by SMS to perform “full maintenance” of any irrigation systems pursuant to a Master Service Agreement (“MSA”).  Citing the terms of the MSA, SMS demanded full defense and indemnification from AMR and alleged that AMR was required to procure general liability insurance, naming SMS as an additional insured on the policy. AMR filed for summary judgment, seeking to dismiss SMS’s third-party complaint, and specifically sought an order holding that (1) the indemnification provision in the MSA was void, and (2) the insurance provision requiring AMR to name SMS as an additional insured on its liability insurance was also void.

The U.S. District Court for the Eastern District of Louisiana first observed that the MSA was indeed a “construction contract” falling within the scope of the Louisiana Anti-Indemnity Act, La. § R.S. 9:2780.1.  The Ruello court then held that a ruling at the summary judgment stage as to an award of defense and indemnity costs was premature, prior to any determination as to the indemnitee’s fault or liability.   Regarding the second issue raised in AMR’s motion for summary judgment, the court found that the broadly worded insurance provision of the MSA – requiring AMR to name SMS as an additional insured, at the “sole cost and expense” of AMR – was invalid under the Louisiana Anti-Indemnity Act. The Ruello court noted the broad language of the provision, coupled with the expense being placed solely on AMR and the fact that the MSA did not exclude coverage for SMS’s own negligence, placed the provision outside any of the statutory exceptions that might render the insurance clause enforceable.