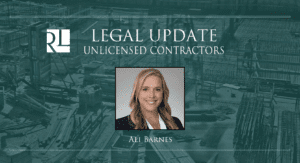 In the first case entitled Ilgen Construction LLC v. Raw Materials, LLC, the ruling of the Louisiana First Circuit affirms that a lien filed by a party who is not a licensed contractor in Louisiana is fatally defective. Ilgen Construction, LLC (“Ilgen”) entered into an oral agreement with Raw Materials, LLC (“Raw Materials”) for clearing and dirt work on two tracts of land in Livingston Parish. Raw Materials is not a licensed contractor in Louisiana; nevertheless, Raw Materials began work and was partially paid for its work. Dissatisfied with the work, Ilgen terminated Raw Materials a few days prior to the project’s completion. Raw Materials filed two materialman’s liens in Livingston Parish. After several demands to remove the liens, Ilgen filed a petition for a writ of mandamus seeking an order directing the cancellation of both liens.

The trial court ruled in favor of Ilgen regarding cancellation of the liens, and Raw Materials appealed. Ilgen was also awarded attorney’s fees and costs. On appeal, the Louisiana First Circuit held that the liens were fatally defective because Raw Materials did not possess a valid contractor’s license. Therefore, the “contract” between Ilgen and Raw Materials was an absolute nullity and is deemed to have never existed. In the absence of a valid and enforceable contract, a contractor or subcontractor cannot assert a valid lien. The appellate court also found that the claim of privilege over two tracts of land with one lump sum amount that did not specify the sum due on each tract was an additional fatal flaw in the lien filings.

In the second case entitled Maroulis v. Entergy Louisiana, LLC, the Louisiana Supreme Court addressed in a per curiam opinion a summary judgment motion filed by an unlicensed contractor. The contractor, Castleman, Donlea and Associates, LLC (“Castleman”), sought to dismiss a third-party demand filed by defendant Hotel Investors, LLC. The suit was brought by a plaintiff who alleged injuries on the job site, the safety of which was allegedly Castleman’s responsibility. Castleman sought to avoid responsibility by raising the nullity of its own contract as a defense.

The trial court denied Castleman’s motion for summary judgment, but the appellate court reversed. The Louisiana Supreme Court again reversed and reinstated the trial court’s ruling. The Maroulis court denied Castleman’s motion upon finding that “a party who knew or should have known at the time of a contracting defect that made the contract absolutely null may not avail himself of the nullity….” The court also referenced the longstanding “clean hands” doctrine recognized in the civil law tradition. Accordingly, the unlicensed contractor could not avoid liability for injuries during a project by arguing that its own contract was illegal and therefore null and void.