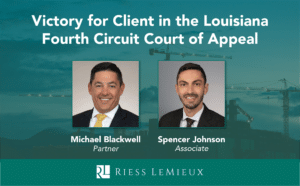 In December 2022, the Louisiana Fourth Circuit of Appeal upheld the trial court decision, in favor of Riess LeMieux’s client, that denied a motion to annul a prior judgment ordering a lien removed.

The firm client was the general contractor for a project where a payment dispute arose between the client and one of its subcontractors that ultimately filed a lien on the project.

Following a hearing, the trial court granted the lien removal, ordering that the lien be canceled and ultimately assessing attorney fees against the subcontractor.

Following oral argument, the Fourth Circuit affirmed the decision of the trial court, finding that (1) the exception of no right of action was an improper attack on a final judgment, (2) the trial court did not abuse its discretion by denying the subcontractor’s motion to annul judgment, and (3) Riess LeMieux’s client was entitled to additional post-judgment attorney’s fees and costs, remanding the matter to the trial court for a hearing to determine the amount.