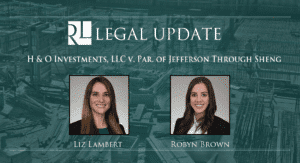 In H&O, Jefferson Parish advertised for bids on a contract to provide grass cutting services pursuant to Louisiana’s Public Bid Law, La. R.S. 38:2211 et seq.  The bid specifications  required bidders to “possess” certain licenses and that “all mowing operations and related work” be performed by the contractor, as opposed to a subcontractor.  After review, Jefferson Parish determined Ramelli Janitorial Services (“Ramelli”) was the lowest responsible and responsive bidder.  H&O filed suit seeking a preliminary injunction, permanent injunction and declaratory judgment arguing that Ramelli was not a responsive bidder due to its failure to comply with the specifications related to licensure and its use of a subcontractor for tree trimming.

More specifically, H&O argued that Ramelli did not “possess” the agricultural license required by the specifications, as the license named someone who was not a Ramelli employee.  Additionally, H&O claimed that the specifications prohibited subcontractors from engaging in “mowing related” activities, and that tree trimming was “mowing related” and required to be performed under the direct supervision of a licensed landscape horticulturist.  The trial court ruled in favor of Jefferson Parish and denied the preliminary and permanent injunction and dismissed the suit.  H&O appealed the trial court’s decision. On appeal, H&O raised two issues regarding the Parish’s determination that Ramelli was the lowest responsive and responsible bidder.  First, whether the requirement to “possess” the appropriate license means the license must name the bidder (or a bidder’s employee).  Second, if the license is not held in the bidder’s name, whether a license held by Ramelli’s subcontractor violates the bid specification that prohibits subcontractors from performing “mowing and mowing related activities.”

After review of the bid specifications and the testimony provided to the lower court, the Fifth Circuit affirmed the trial court’s judgment and held “possession” of a license for purposes of responding to a bid advertisement does not require the license to be issued in the name of the bidder or the bidder’s employee, so long as the work for which the license is required does not fall within the list of activities for which subcontractors are prohibited.  Additionally, the Court found that tree trimming did not fall under the scope of a “mowing related activity” that could not be performed by a subcontractor.  Therefore, Ramelli’s subcontractor could possess the necessary license.

As shown by the Fifth Circuit’s decision, bid specifications must be strictly complied with, particularly as it relates to licensure.  However, a bidder may “possess” a license through its subcontractor as long as subcontractors are not prohibited from performing the work for which the license is required.