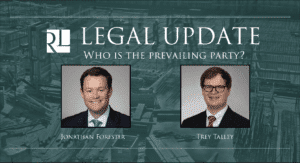 Who is the prevailing party?

How do courts determine who is the prevailing party for purposes of awarding attorneys’ fees and costs? In a recent decision in Team Contractors, LLC v. Waypoint NOLA, LLC, et al., the United States District Court for the Eastern District of Louisiana ruled on exactly this issue and offered some clarity into how courts will determine which party is deemed to be the prevailing party.

In Team, Team Contractors, LLC (“Team”), the general contractor on a construction project, sued Waypoint NOLA, LLC (“Waypoint”), the owner of the project, for breach of contract and also sued several designers and subcontractors under the tort theory of negligence. Team’s breach of contract claim arose out of Waypoint’s alleged failure to pay Team for completed and accepted work that Team performed on the project. Eight months before the trial, Waypoint paid Team $1,023,514.09 for its work on the project, responding that Team had not submitted the proper final lien waivers until that time. In the trial court, Team was awarded $509,381.99 for its negligence claim but was awarded $0 for its breach of contract claim. The jury found that Waypoint did not breach the contract by failing to timely pay Team the amounts owed because Team had not submitted the proper final lien waivers, which was a requirement under the contract.

Team subsequently filed a Motion to Declare Plaintiff the Substantially Prevailing Party, so that it would be awarded attorneys’ fees and costs. The Court agreed that under the terms of the contract, the substantially prevailing party is entitled to recover its attorneys’ fees, experts’ fees, and costs. However, Waypoint argued that it was the prevailing party, since the jury found that Waypoint did not breach the contract. Team, on the other hand, argued that it was the prevailing party since (1) it won its negligence claim against the designers and subcontractors and (2) Waypoint ultimately paid Team the $1,023,514.09 that Team sought in filing the lawsuit.

In deciding the issue, the court cited Black’s Law Dictionary, which defines “prevailing party” as “[a] party in whose favor a judgment is rendered, regardless of the amount of damages awarded.” The Court further stated that this definition in in line with that of Louisiana Courts, which have required prevailing parties to receive a judgment or verdict on an issue. The Court further clarified that a party that successfully prosecutes an action or successfully defends against it is a prevailing party.

The Court ultimately ruled that Team’s negligence award against the designers and subcontractors does not render it a prevailing party under the contract—the prevailing party clause only applies to breach of contract claims arising under the contract. Further, the Court ruled that since the jury found that Waypoint had not breached the Contract, including by withholding payment until it received an adequate final lien waiver, Waypoint is deemed to be the prevailing party, and Team could not recover its attorneys’ fees and costs.