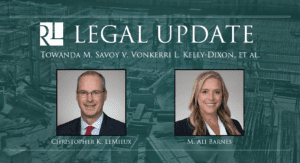 In Savoy, the Louisiana Third Circuit Court of Appeal summarily found that there was no insurance coverage provided to the Lafayette Consolidated Government, who sought coverage as an additional insured under a commercial general liability (“CGL”) policy.

Savoy stems from an accident wherein the plaintiff’s teenaged son was struck by a car in Lafayette, Louisiana, while trying to cross a median on a bicycle. Plaintiff filed suit on behalf of her minor son against the vehicle’s driver, the Lafayette Consolidated Government (“LCG”), the Louisiana Department of Transportation and Development (“DOTD”), and Esthay Enterprises, Inc. – a mowing contractor hired by LCG (“Esthay”). LCG cross-claimed Esthay and Esthay’s insurer, The Burlington Insurance Company (“Burlington”). Burlington, in turn, filed a motion for summary judgment, arguing that there was no insurance coverage owed to LCG as an additional insured under Burlington’s policy issued to Esthay (the “Burlington Policy”) due to the timing of the accident, which was granted and then affirmed on appeal.

LCG argued it was entitled to additional insured coverage under several endorsements of the Burlington Policy, one of which was an ongoing operations endorsement, which provided coverage for injuries to third parties that occurred when the work was actively ongoing – i.e., under this endorsement, LCG would have been an additional insured if the injury to the plaintiff occurred while Esthay was actively mowing the grass in question. Both the trial court and the appellate court found that it was not in dispute that Esthay was not actively mowing the median at the time of the accident, therefore the ongoing operations endorsement did not apply, and LCG was not afforded coverage under this endorsement.  Thus, while LCG was an additional insured as required by contract, there was no coverage for LCG in between the grass cutting services, per the language of the policy.

The most important take-away here is to make sure you understand the scope of coverage under your CGL policies, recognizing that that the scope of coverage afforded to an additional insured under most CGL policies does not apply to incidents that occur after the work has been completed or is no longer ongoing. This is why it is wise to require coverage as an additional insured for completed operations after the work is completed (consistent with Louisiana’s 5-year construction claim peremption period under LA. R.S. 9:2772)