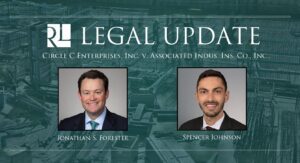 This case arises out of a contract between Plaintiff and Axiall, LLC (“Axiall”) for work in connection with the demolition of a decommissioned methanol plant in Plaquemine, Louisiana. Prior to completion of the demolition work, Plaintiff demobilized from the project. Thereafter, Plaintiff filed suit against Axiall, asserting claims for amounts due pursuant to the terms of the contract. In response, Axiall filed an Answer and Reconventional Demand against Plaintiff, alleging that Plaintiff failed to complete the work under the contract, failed to pay an agreed upon sum as set forth in the contract and bid, left portions of the plant in an unstable and unsafe condition, and stripped high value materials from the plant.

Plaintiff requested defense and indemnity from its insurance company defendant, Associated Industries Insurance Company, Inc. (“AIIC”), under the commercial general liability policy that Plaintiff had in place during the project. AIIC subsequently issued a coverage determination denying Plaintiff’s request for defense and coverage under the policy and sought summary judgment asserting that AIIC properly denied coverage for the claims asserted against Plaintiff by Axiall in the Reconventional Demand.

In assessing AIIC’s motion for summary judgment, the Middle District of Louisiana first discussed what gives rise to an insurer’s duty to defend. The Court stated that whether an insurer owes a duty to defend is determined by application of the “eight corners rule,” which directs the court to examine the four corners of the complaint and the four corners of the insurance policy without resort to extrinsic evidence. When applying the “eight corners rule,” the duty to defend is triggered if the facts alleged in the complaint could possibly fall within the matters covered under the policy. Plaintiff must prove that reasonable jurors could find that Axiall’s Reconventional Demand reveals “property damage” caused by an “occurrence” as those terms are defined in the policy.

The Court noted that, when confronted with policy language identical to that at issue in this case, several courts have made clear that damages stemming from breach of contractual obligations and intentional conduct are not “accidents” as contemplated by the policy. Here, the Court found that the allegations raised by Axiall against Plaintiff were for breach of contract, and as such Axiall’s claims did not amount to an “occurrence” within the meaning of the policy.

First, Plaintiff argued that “property damage” was adequately asserted by Axiall’s allegations that Plaintiff caused “hazards” and left the property in an “unsafe” condition. However, the Court found that the portions of the Methanol Plant that remained on the property—regardless of the hazards they posed—did not constitute physical injury to the property itself. Second, Plaintiff argued that the policy’s definition of “property damage” includes Axiall’s claim for the value of the lost time of its employees as a “loss of use” of tangible property. The Court noted that loss of profits that do not flow from injury to tangible property are not a “loss of use” as contemplated by the policy, economic loss alone is not enough to constitute property damage under the policy. Thus, the Court found that there was no coverage under the policy for the claims asserted by Axiall in its Reconventional Demand since neither the “occurrence” requirement nor the “property damage” requirement were met.

This case is important in that it stands for the proposition that economic losses alone will likely not be covered by insurance unless such losses flow from property damage.