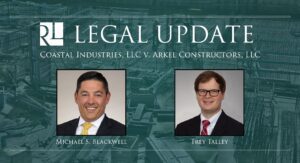 In Coastal Industries, LLC v. Arkel Constructors, LLC, the Louisiana First Circuit Court of Appeal again upheld the sanctity of arbitration awards and limited any challenge to them to the exclusive grounds outlined in La. R.S. 9:4210 and La. R.S. 9:4211. Coastal arises out of a construction project in Garyville, Louisiana in which a dispute arose between Arkel Constructors, LLC (Arkel), the general contractor on the project, and Coastal Industries, LLC (Coastal), a subcontractor, after Arkel terminated Coastal for default. Coastal filed suit against Arkel for breach of the subcontract resulting from the allegedly improper termination, and Arkel filed a reconventional demand and a motion to stay pending arbitration, which was granted by the trial court.

After a nine (9) day arbitration hearing, the arbitrator denied Coastal’s claims for improper billing and payment methods but granted Coastal’s claim for improper termination, ruling that Coastal was 95%-97% complete upon its termination and therefore was “substantially complete” with its work. As such, the arbitrator determined that Arkel’s termination of Coastal was a “termination for convenience.” However, since it was determined that Arkel overpaid Coastal, the final money judgement was against Coastal and in favor of Arkel in the amount of $44,755.98, plus attorney’s fees and costs, all of which totaled $530,574.02.

In Coastal, the Court cited to the Louisiana Supreme Court case of Crescent Prop. Partners, LLC v. Am. Mfrs. Mut. Ins. Co., 158 So. 3d 798, 802 (La. 2015), and reaffirmed that the statutory grounds are the exclusive grounds on which an arbitration award can be vacated. Importantly, the First Circuit ruled that the statutory grounds for vacatur or modification do not include errors of law or fact, which are insufficient to invalidate an award fairly and honestly made. The Court clarified that even misinterpretation of a contract by an arbitrator is not subject to judicial correction, as judges are not entitled to substitute their judgement for that of the arbitrator chosen by the parties.

In the wake of Coastal, it is clear in Louisiana that an arbitration award is presumed to be valid and can only be vacated or modified under the exclusive statutory grounds set forth in La R.S. 9:4210 and 9:4211, which are very limited grounds. Errors of law of fact are insufficient to invalidate an award fairly and honestly made by the arbitrators.