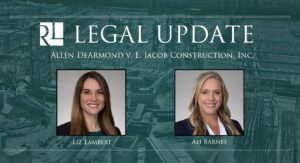 Arbitrator’s Award of Attorney’s Fees Upheld Under the Open Account Statute, Even Though the Construction Contract Did Not Provide for Attorney’s Fees

DeArmond is an appeal of an arbitration award entered in favor of E. Jacob Construction, Inc. (“EJC”) and against Mr. Allen DeArmond (“DeArmond”), which included an award of attorney’s fees. In April of 2018, DeArmond and EJC entered into a contract for EJC to perform certain repair work for flood-related damages on a home owned by DeArmond in Baton Rouge. The contract did not provide for attorney’s fees. DeArmond paid two of five installment payments to EJC, and withheld the remaining three, for, what DeArmond contended, was a failure by EJC to adequately complete numerous punch list items. EJC subsequently filed a lien on the property, and DeArmond responded by filing a breach of contract suit, and EJC, in turn, filed a reconventional demand for the remaining balance owed under the contract under the Louisiana Open Account Statute, La. R.S. 9:2781, et seq. The parties agreed to retain an arbitrator to oversee the dispute. The arbitrator found in favor of EJC on all but two items on the contested punch list, rendering a net judgment against DeArmond and in favor of EJC in the amount of $40,598.20 – which included interest and attorney’s fees under the Open Account Statute. DeArmond filed a Motion to Vacate, Modify, or Correct Arbitration Award; however, the award was upheld by the trial court.

On appeal to the Louisiana First Circuit, DeArmond asserted that the Arbitrator’s award should be vacated because: (1) the award shows evident partiality; (2) the Arbitrator exceeded his powers in awarding EJC attorney fees under the Louisiana Open Account Statute and in awarding ECJ interest on unpaid invoices; and (3) the award shows a material mathematical miscalculation.  Specifically, De Armond challenged the arbitration award pursuant to La. R.S. 9:4210 – the exclusive provision under the law which allows for an arbitration award to be vacated, modified, or corrected for a limited number of situations, to include evidence of an arbitrator’s partiality or corruption, or evidence that the arbitrator exceeded his powers. La. R.S. 9:4211(A) also affords a remedy to adjust an arbitration award where the award contains an evident miscalculation of figures.

Ultimately, the First Circuit reiterated Louisiana’s public policy for favoring arbitration, which creates the presumption that arbitration awards are valid, only to be modified or corrected for the limited number of exclusive grounds noted in La. R.S. 9:4210-11. The Court looked at the award granted to EJC, and allowed for an adjustment of $80.00 for a simple miscalculation, but did not find that the arbitrator displayed evident partiality or exceeded his powers in finding for EJC, as contended by DeArmond. Further, the Court held that the award of attorney’s fees was proper under the Open Account Statute, even though the construction contract did not provide for attorney’s fees, stating that there is no requirement that there must be more than one transaction between the parties for an open account to exist, and nowhere in the statute are construction accounts or contracts specifically excluded. Specifically, the Court held “Under a plain reading of La. R.S. 9:2781 [ . . . ] when the Arbitrator rendered that judgment in ECJ’s favor, Mr. DeArmond became liable to ECJ for reasonable attorney fees under La. R.S. 9:2781A.”

Thus, it is important to be mindful that arbitration awards in Louisiana are presumed valid and will only be disturbed in limited circumstances.  Further, contractors should know that attorney’s fees may be available under Open Account Statute on construction contracts, even if your contract does not provide for them.