Louisiana Court of Appeal for the First Circuit recently highlighted the importance for general contractors to clearly and unambiguously place a subcontractor in default for purposes of enforcing a surety performance bond. 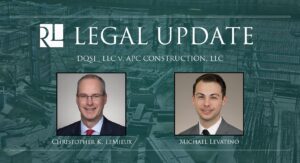 In a recent decision, DQSI, LLC v. APC Construction LLC, 2021-1256 (La. App. 1 Cir. 7/29/22), 2022 WL 3009926, the Louisiana Court of Appeal for the First Circuit reviewed a motion for summary judgment which granted the dismissal of the general contractor’s claims under the performance bond and against the surety. The court granted the surety’s summary judgment motion due to the general contractor’s failure to comply with the requirements of the performance bond.  A dispute arose on the project regarding the subcontractor’s performance.