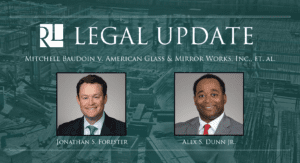 In the recent case of Baudoin v. Am. Glass & Mirror Works, Inc., 2020-541, 2022 WL 303258 (La. App. 3 Cir. 2/2/22), reh’g denied (Mar. 23, 2022) the ruling of the district court was affirmed by the Third Circuit Court of Appeal of Louisiana holding that a contractor must comply with its insurer’s Special Conditions Endorsement Requirements (“Special Conditions”) to obtain coverage under the policy.  Further, the Court held that Louisiana’s Anti-Indemnity Act (LA R.S. 9:2780.1) does not render specific clauses in a policy of insurance unlawful when a policy requires that policy holder obtain indemnity agreements from subcontractors, as well as obtain certificates of insurance adding the contractor as an additional insured.

Plaintiff, Mitchell Baudoin, was installing flooring for Southern Tile Company, Inc. on a new construction site in Breaux Bridge, Louisiana where Charles Goudeau d/b/a Charles Goudeau General Contractor was the general contractor. Goudeau brought an action to recover for damages he incurred when he was struck by a vehicle being operated by a Chad Fritz, an employee of American Glass, after exiting a portable restroom.

In February 2018, Plaintiff initiated suit against Goudeau and his insurer, Accident Insurance Company (“AIC”), and other parties for personal injury damages alleging that the accident and resulting injuries were caused by the negligence of Goudeau. During discovery, Goudeau admitted that he had not obtained indemnity agreements or received the status as an additional insured on the subcontractors’ policies of insurance.  In March 2020, Accident Insurance Company (“AIC”), the insurer for Goudeau, filed a motion for summary judgment alleging a lack of coverage on the basis that both an exclusion and an endorsement within the CGL policy issued to Goudeau barred coverage for plaintiff’s claims.

AIC contended the incident involved an injury to an employee, contractor and/or employee of the contractor, which is specifically and unambiguously excluded under Endorsement Form 3013, styled “Exclusion – Injury to Employees, Contractors & Employees of Contractors” (“Employees and Contractors Exclusion”).  Additionally, AIC argued that there was no coverage for Plaintiff, because Goudeau failed to comply with the Special Conditions.

As a condition precedent to coverage […] the insured must have, prior to the start of work and the date of the “occurrence” giving rise to the claim or “suit”:

(2) COI from the independent contractor naming the insured as an additional insured;

(3) Obtain proof that the independent contractor has workers compensation insurance; and (4) Obtained proof that all licenses as required by local and/or state statute, regulation, or ordinance are up to date.

When AIC’s motion for summary judgement was heard in June 2020 the district court disagreed with AIC’s contention that the Employees and Contractors Exclusion barred coverage, but accepted AIC’s contention that the Special Conditions barred coverage for plaintiff’s claims against Goudeau, thus barring coverage for lack of evidence of complying with Contractors Special Conditions Endorsement.

Plaintiff and others subsequently filed an appeal with the sole assignment of error that the lower trial court was in error ruling that since Mr. Goudeau was unable to produce evidence that he obtained Insurance Certificates for the subcontractors, that Mr. Goudeau would not be provided with coverage under the AIC policy because he did not comply with the Contractors Special Conditions Endorsement.

The Third Circuit Court of Appeal subsequently upheld the ruling of the lower court and opined that the conditions precedent to coverage requiring Goudeau to obtain particular indemnity agreements from subcontractors performing work on the construction project, as well as, to obtain status as an additional insured under those subcontractors’ insurance policies, were held to be lawful in Sasser, 102 So. 3d 842 and found no merit to the argument that La. R.S. 9:2780.1 renders the Special Conditions of the insurance policy unlawful.

Accordingly, as the conditions for coverage under the commercial general liability policy clearly were not met, the Third Circuit found that the district court did not err in granting summary judgment in favor of AIC, the liability insurer, and just as in Sasser, the general contractor that failed to satisfy the conditions for coverage under the Special Conditions of the policy at issue was denied coverage.

Takeaway – Contractors who do not comply with insurers’ special conditions endorsement requirements do so at their own peril. Contractors, prior to commencement of any work on the premises and mobilization, need to adhere to the Contractors Special Conditions endorsement required in their commercial general liability policy and obtain the requisite documents from subcontractors on the job as a condition of coverage, as well as any agreements of indemnity that may be required.