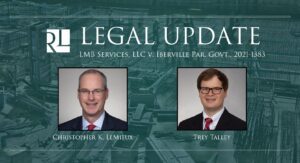 LMB Services, LLC v. Iberville Par. Govt. arises out of a bid dispute for a public construction project. Rigid Constructors, LLC (“Rigid”) was the lowest bidder, Patriot Construction and Industrial, LLC (“Patriot”) was the second lowest bidder, and LMB Services, LLC (“LMB”) was the third lowest bidder. LMB filed a protest, maintaining that Rigid and Patriot’s bids were defective and that it was therefore the lowest responsive bidder. However, Iberville Parish Government (“Iberville”) rejected the protest and awarded the contract to Rigid. LMB subsequently filed suit against Iberville, as the sole defendant, seeking to enjoin the contract award, and Patriot intervened.

The parties to the lawsuit ultimately entered into a stipulation whereby the contract would be awarded to Patriot. However, at the time of the stipulation, Rigid was still the lowest bidder and was not involved in the lawsuit or included in the stipulation discussions. Thereafter, Rigid filed a petition to intervene, maintaining that it was an indispensable party.  In response, Rigid filed exceptions urging that the suit was moot and/or untimely because it was not commenced prior to Iberville awarding Rigid the contract.  The trial court agreed. LMB and Patriot subsequently filed a motion to enforce the stipulation, and the trial court denied the motion and dismissed all of the claims asserted by LMB and Patriot with prejudice. Patriot appealed.

The First Circuit Court of Appeals agreed with the trial court, dismissing LMB’s claims on multiple grounds. One critical basis for the trial court’s ruling was that the suit was not commenced timely, since it was not commenced prior to Iberville’s award of the contract to Rigid. The other main basis for the denial was that the proceeding lacked a party required to be joined under La. C.C.P. art. 641, as Rigid was not included in the proceeding. The First Circuit made clear that Rigid was a party that was needed for complete adjudication of the matter. Rigid had an interest in the subject matter of the actions, and Rigid’s absence from the proceedings would impair or impede its interest in protecting its contract. For the forgoing reasons, the First Circuit affirmed the trial court’s judgement.

LMB Services reiterates that in order for a bid protest lawsuit to be timely, the contractor must bring the action prior to the award of the contract to the lowest bidder. This case further makes clear that pursuant to La. C.C.P. art. 641, bid protest actions must join all parties that have an   interest in the subject matter of the actions and whose absence from the proceedings would impair or impede its ability to protect that interest. Therefore, in an action by the second-lowest bidder against the public entity, the low bidder must be joined into the proceedings. For the foregoing reasons, it is best practice for contractors in bid disputes to (1) file suit prior to the award of the contract and (2) name both the public entity and the winning contractor in the lawsuit.