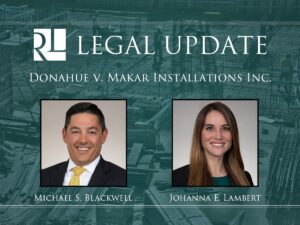 U.S. Court of Appeals for the Fifth Circuit Declines to Expand General Duty Owed by Construction Contractors to Other Contractors on a Job Site

In Donahue v. Makar Installations Inc., the plaintiff, Joshua Donahue, a laborer employed by American ManPower Services, Inc., filed a negligence action against several entities that participated in a multi-phase construction project in New Orleans.  Makar was a subcontractor whose role was to build a concrete mezzanine platform for the project. While Makar was performing its work, one of its employees was injured by a fan present on the project site.  Makar reported the incident to the general contractor, which resulted in the fan being turned off.  Months after Makar completed its work, Donahue was working on the platform when the same fan, which was still on, struck him in the head.

Donahue filed a negligence action, naming Makar, based on the theory that Makar owed a heightened duty to all on-site personnel, including Donahue, under the Occupational Safety and Health Administration’s (“OSHA”) “multi-employer doctrine.” Under the multi-employer doctrine, OSHA may issue citations to “creating,” “exposing,” “correcting,” and “controlling” employers for a violation of “occupational safety and health standards” at a multi-employer worksite, even if the employer’s direct employees are not exposed to the hazard. Donahue argued that Makar was an “exposing,” “correcting,” and “creating” employer.

However, the United States District Court for the Eastern District of Louisiana, applying Louisiana law, disagreed.  In granting summary judgment in Makar’s favor, the court first noted that the multi-employer doctrine is limited to “controlling employers” and that the U.S. Court of Appeals for the Fifth Circuit (“Fifth Circuit”) has been unwilling to recognize OSHA’s authority to cite “creating,” “exposing,” or “correcting” employers.  Secondly, the court noted that even if it accepted Donahue’s argument, it would make no difference because any duty Makar had under OSHA’s multi-employer doctrine is materially identical to the general duty recognized by Louisiana courts.

Ultimately, the Fifth Circuit affirmed, finding that Makar was entitled to summary judgment as it lacked authority, control, or responsibility over the fan (or any protective measures) even while it was on the jobsite, let alone two months after it had departed.  Further, the Fifth Circuit highlighted that Makar discharged its general duty to Donahue by eliminating the danger of the fan by keeping it off and reporting it to the entity who had authority, control, and responsibility over the working conditions.

Takeaway – Contractors on construction projects owe a general duty to other contractors and their employees to refrain from creating an unreasonable risk of harm or a hazardous condition.  However, this duty is limited in circumstances where the contractor lacks control or responsibility over the worksite at the time of the injury.