Hogs For the Cause

Hogs For the Cause 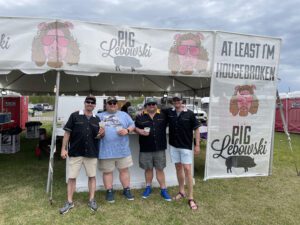 On April 1-2, Riess LeMieux Partner, Jon Forester, competed on a team for Hogs For the Cause, which is a charity cookoff established in 2008.

This year Hogs, as it is affectionately known,  raised over $2.6 Million for pediatric brain cancer patients. Jon enjoyed being part of the team, The Pig Lebowski, which has competed in this charity competition for over 10 years.   This year, The Pig Lebowski took home 8th place whole hog, out of 90 teams at the competition.