Robert Riess has witnessed his father, Michael Riess, build a career in law since 1989. 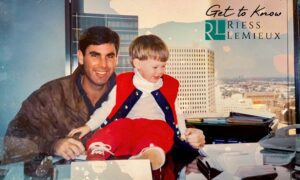 “I was actually born the same year that my father left to start his own firm.  Growing up, I was acutely aware that he was not only an attorney but running a business and responsible for the employment of other attorneys and associate staff, some of which remain today at Riess LeMieux,” Robert remembered.

He can recall visiting his father’s office, looking out of the window on a high floor of the Energy Centre, and taking in the “unmatched view” that it provided. However, the most important thing that stuck with Robert at a young age was the drive to form connections and help people through whatever path they chose. This inspiration ultimately him to follow in his father’s footsteps into a career in law.

Although Michael would support his son in any career path he could have chosen, he was very happy to see his son pursue law school at Tulane University. From that point on, Michael envisioned the pair working together.

“Since Robert decided to go to Tulane Law School, it has always been a goal of mine to have Robert come work with me and that goal was finally achieved in March 2018, after he practiced law at another firm for about 3 years,” Michael remembered.

Both father and son cherish their time working together. Whether a quick question about a legal matter or having lunch together, Michael and Robert continue to make each other better and the firm stronger.

“Working with my father for the last four years has shown me that the same reasons my brother and I consider him the greatest father are the same reasons that I now consider him a great boss,” Robert said. “He will actively educate you while allowing you to add to the game plan. Despite his patience, he has no qualms with lighting a fire under you. He has repeatedly shown willingness to allow anyone wanting to advance in the firm to do so.”

The admiration flows both ways. Michael has been able to not only watch his son grow up but also watch him come into his own as an attorney, take on more responsibilities, and develop a greater understanding of the law.

“My favorite aspect of working with my son, Robert, at Riess LeMieux, is the fact that I can count on him to deliver a work product for our clients that we are both proud of. Simply stated, we rely on Robert to expeditiously respond to the clients’ requests – and he has also started to develop and maintain his own client base, which is exciting to see,” Michael commented.

Bonds at Riess LeMieux do not stop with family. Robert also formed family-like relationships with the other partners at the firm. To have time to adjust from just a father and son relationship to a partner and associate relationship, Robert worked closely with another founding partner of the firm, Christopher LeMieux.

“Chris’ willingness to take a chance on me and let me prove myself as an attorney, and not just as my father’s son, was something that I will always be grateful for. Without it, I would not have had the chance to work with my father,” Robert commented.

Although it seems normal now, both father and son still cherish their time working with and learning from each other.

“I know that I am lucky to be learning from a great attorney who also happens to be my dad,” Robert commented. “If we were to take a survey of the attorneys he has worked with and against over the years, I am certain that many would, maybe not happily, rank him as one of the most skilled attorneys in the New Orleans area.”

Michael also finds that being a family business motivates him to be a better attorney.

“It is a pleasure to work with my son, both from a family perspective and a legal perspective.  Working with my son has kept me motivated as I get older to continue to provide the best legal services we can for clients, both new and old, of Riess LeMieux, LLC.”