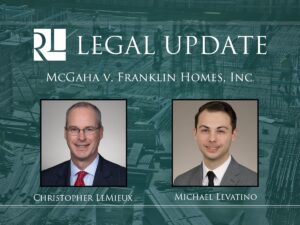 The Louisiana Fourth Circuit Court of Appeal in McGaha v. Franklin Homes, Inc., 2021-0244 (La. App. 4 Cir. 2/4/22). 2022 WL 336603, recently observed that redhibition claims may not apply to construction contracts. The Court implicitly referenced the difference between a contract to build verses a contract to sell and the effect the distinction may have on a party’s rights to assert redhibitory defect claims.

The Plaintiffs filed suit for damages and asserted numerous causes of action against the Defendants, including redhibition, violation of Louisiana Unfair Trade Practices Act; negligence; negligent or intentional misrepresentation; violation of the Louisiana Products Liability Act; detrimental reliance; breach of contract; and fraud. The Plaintiffs primarily asserted that the modular home was defective because it did not withstand a category one hurricane.

In response to the Plaintiffs’ claims, the Defendants filed various exceptions and motions for summary judgment. The Defendants filed exceptions of no cause of action, prescription and peremption related to the Plaintiffs’ claims. After a hearing on the issues, the court granted all exceptions of prescription and peremption on all claims except for those related to fraud and intentional misrepresentation.

Gulf Coast, Franklin, and the Plaintiffs appealed the judgment. On appeal, the court reviewed the trial court’s granting of the exceptions of prescription and peremption. Principally, the Fourth Circuit reviewed the granting of the exception of prescription related to the Plaintiffs’ Redhibition claim. The Plaintiffs argued that the manufacturer and seller of the modular home were presumed to have knowledge of any defect in the home and thus the Plaintiffs would have one year from discovery of the defect to file suit, or ten years from the perfection of the contract of sale, whichever occurred first. Thus, the Plaintiffs’ claim for redhibition had not prescribed.

The Plaintiffs relied upon the case, Credeur v. Champion Homes of Boaz, Inc., 2008-1096 (La. App. 3 Cir. 3/4/09), 6 So.3d 339, that held a seller of a modular home had presumed knowledge of any defects as would a manufacturer of the modular home. Thus, giving the plaintiff in Credeur the longer prescriptive period to file a redhibitory defect claim.  The Plaintiff relied on this case to hold both Franklin Homes and Gulf Coast were presumed to have knowledge of any defects, thus, imposing the prescriptive period of one year from discovery of the defect and ten years from perfection of the contract, whichever occurs first.

Although the Court stated that Franklin Homes’ argument that redhibition did not apply to construction contracts had merit, it recognized that the parties filed an exception of prescription and peremption, which was granted by the lower court. Thus, the Court did not explicitly consider the merits of the redhibition claim in terms of a construction contract but considered whether the Plaintiffs redhibitory defect claims prescribed.

The Court noted that when viewing the contract as a contract of sale, the evidence supports a finding that Gulf Coast, Franklin Homes, NTA lacked knowledge of a defect in the Plaintiffs’ home because it performed as expected in a category one hurricane. The expert testimony established that just because a home is rated to withstand 140mph winds doesn’t mean it will not sustain some damage. Thus, there was sufficient evidence that there was no defect and/or presumed knowledge imposed on the manufacture and seller entitling the Plaintiff to a prescriptive period of one year from discovery and/or ten years from execution of the contract. Therefore, the Plaintiffs’ claims for redhibition were prescribed.

Plaintiffs indicated they had control over the specifications of the modular home and requested numerous upgrades. They negotiated with Gulf Coast, utilizing the quotation provided by Franklin Homes, to select desired options and determine the price prior to Franklin Homes constructing the home. Franklin Homes furnished skill and labor to build the desired modular home.

Thus, the Court found that the granting of the exception of prescription as to the claim of redhibition against Gulf Coast, Franklin Homes, and NTA was reasonable since there was no presumed defect and it had been over two years since the modular home was delivered before the Plaintiffs filed suit. As to the remaining claims, the Court found that the trial court did not err in granting the exceptions of prescription and peremption as to all claims except the fraud and misrepresentation claims against Gulf Coast, Franklin Homes, and NTA because the Plaintiffs alleged sufficient facts that the defendants misrepresented the modular’s ability to withstand hurricane force winds.

Although McGaha v. Franklin Homes primarily delt with prescriptive and peremptive periods, the case sheds light on a commonly overlooked distinction in sales and contracts, mainly the difference between a contract to build and a contract to sell and the potential effect it may have on claims for redhibitory defects. When the Courts distinguished the Credeur case, it implicitly applied the multi-factor Duhon v. Three Friends Homebuilders Corp, 396 So.2d 559 (La. App. 3 Cir. 1981), test to distinguish between Credeur’s contract to sell and McGaha’s a contract to build. In the Courts analysis, it implicitly applied a the Duhon test reviewing the Plaintiffs’ control over specifications, negotiations in the construction contract, and who furnished skill and labor without concluding whether redhibitory defects apply to construction contracts.