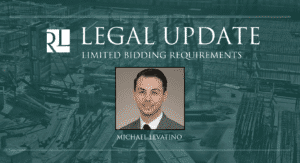 Four contractors bid on the project, and each bidder submitted the bid on the electronic bid form. The lowest responsive bidder, LA Contracting, identified only the four items listed in the bidding instructions while the other three bidders identified five items listed in the bid advertisement. The second lowest bidder filed suit seeking a preliminary injunction, declaratory judgment, and mandatory injunction stating that LA Contracting’s bid was non-responsive for failing to identify the architect as required by the bid advertisement. LA Contracting intervened. The trial court ruled in favor of LA Contracting and denied the preliminary injunction, declaratory judgment, and mandatory injunction. The second lowest bidder appealed the trial court’s decision.

The Court reasoned that since the public entity could only require the twelve items listed in La. R.S. 38:2212(B)(2) in the bid documents which does not include the identification of the architect, the public entity’s requirement to list the architect violated Public Bid Law. Therefore, the Court Found LA Contracting’s bid was responsive because to hold otherwise would be ignoring the requirements set forth in La. R.S. 38:2212(B)(2).

As shown by the First Circuit’s analysis, the Court has interpreted La. R.S. 38:2212(B)(2) narrowly which precludes a public entity from adding bidding requirements not found in the statute. Byron E. Talbot Contactor and its progeny provide a fair warning to public entities attempting to impose more restrictive bidding requirements than those required by La. R.S. 38:2212(B)(2).