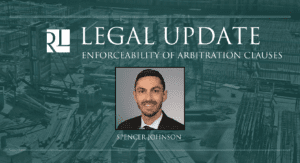 A federal court recently reiterated that the Federal Arbitration Act (“FAA”) preempts state laws, including La. R.S. § 9:2779 pertaining to construction contracts, that would otherwise preclude parties from arbitrating a dispute in another state.  In Priebe v. Advanced Structural Technologies, Inc., the U.S. District Court for the Eastern District of Louisiana ruled that La. R.S. § 23:921 did invalidate a valid arbitration agreement that required the parties to arbitrate an employment dispute in a foreign venue.

The Priebe court concluded that the arbitration clause was enforceable because the FAA−which “embodies the national policy favoring arbitration agreements on equal footing with other contracts” −preempted La. R.S. § 23:921.  In support of its ruling, the court cited Southland Corp. v. Keating, wherein the U.S. Supreme Court observed:  “In creating a substantive rule applicable in state as well as federal courts [the Federal Arbitration Act], Congress intended to foreclose state legislative attempts to undercut the enforceability of arbitration agreements.”

The federal district court also emphasized a previous ruling by the U.S. Fifth Circuit in Ope Int’l LP v. Chef Morrison Contractors, Inc., which held that the FAA preempted La. R.S. § 9:2779 to the extent the statute prohibits parties from enforcing out-of-state choice-of-venue provisions.  La. R.S. § 9:2779 declares “null and void and unenforceable as against public policy any provision in certain construction subcontracts which requires a suit or arbitration proceeding to be brought in a forum or jurisdiction outside of Louisiana.” In ruling that the FAA preempted La. R.S. § 9:2779, the Fifth Circuit reasoned that the FAA supersedes other state laws that would otherwise preclude parties from enforcing arbitration agreements.

The Priebe court extended the reasoning of Ope Int’l LP and held that the Louisiana statute in question, La. R.S. § 23:921, was superseded by the FAA’s strong public interest in the enforceability of arbitration provisions.  This decision serves as a stark reminder that similar statutes, such as to La. R.S. § 9:2779 pertaining to construction contracts, are likely unenforceable when an arbitration clause requires a contracting party to arbitrate in another venue or forum.