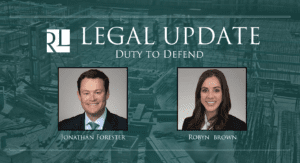 In this matter, Plaintiff, Project Consulting Services, Inc., (“PCS”) was contracted by Spectra to work on a pipeline construction project which included “overseeing the pipeline project’s construction”. The pipeline moved during a storm and allegedly suffered damages. Spectra’s insurer, Starr, paid for the damages and subsequently brought a subrogation claim against PCS alleging negligence and breach of contract. PCS sought defense of the Starr suit from its general liability insurer, Wausau. Wausau did not believe the general liability policy provided coverage for the Starr Suit. PCS, therefore, sought a declaratory judgment that its insurer, Wausau, had a duty to defend PCS in the suit.

In reaching its decision, the Court considered the allegations of the Starr Suit which included assertions that PCS was hired to “provide oversight and design of the construction of the pipeline”.  Importantly, the suit alleged the pipeline would not have moved and damage would not have occurred but for PCS’s negligence in “consulting review of the design and construction features of the project”.  The Court held the allegations in the Starr Suit involved the “inspection” of “engineering activities” that constitute professional services. Therefore, the Court found that even though PCS did provide professional and non-professional services, PCS’s non-professional services were not related to PCS’s negligence in reviewing the design and construction features of the pipeline. Accordingly, the Court held the Starr Suit presented a professional liability claim, which was excluded under the Policy and Wausau did not have a duty to defend.

While the duty to defend is broad, the insured here was unable to show that any of the claims were not unambiguously excluded because the allegations arose from PCS’s capacity as an engineer.  This case serves as a reminder that if you are an entity providing professional services, you should obtain a separate professional liability policy even if the majority of the work being done is non-professional.