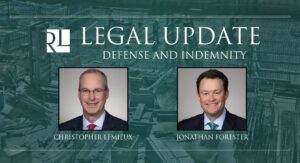 In a recent decision, Endurance American Ins. Co. v. ABC Caulk Contractors, Inc., the Middle District of Louisiana ruled that a determination of the insurer’s duty to indemnify was unripe and nonjusticiable under Louisiana law and dismissed the claim. In this matter, the subcontractor, RD&M, failed to have its sub-subcontractor sign an indemnity agreement. Issues arose with RD&M’s sub-subcontractor’s work. The general contractor, LKM, received payments from its insurer, Endurance, to settle claims against LKM. As a result, Endurance filed suit against RD&M to recover amounts Endurance paid to LKM to remediate the work and settle claims. RD&M sought defense and indemnity from its insurer, HGS. During the litigation, HGS filed an Amended Declaratory Judgment stating that HGS had no duty to defend or indemnify RD&M since RD&M failed to have the sub-subcontractor sign an indemnity agreement.

Subsequently, RD&M filed a motion to dismiss/stay the indemnity claims and a 12(e) motion to determine whether HGS’s duty to defend and indemnify stated in HGS’ Amended Declaratory Judgment was too vague or ambiguous for RD&M to properly respond. The Middle District broke down the claims into two primary issues: (1) whether the indemnity claim is ripe for adjudication; and (2) whether the HGS Amended Declaratory Judgment plead sufficient facts to survive a 12(e) motion.

Additionally, the Court made note that caselaw has established an exception which allows the court to hear issues of indemnity before the underlying litigation has been resolved. The exception applies when there is (1) no duty to defend; and (2) the same reasons that negate the duty to defend likewise negate the duty to indemnify. Finding the exception inapplicable, the Court relied on prior Middle District caselaw stating if there is a slight possibility that the insurer could have a duty to indemnify down the road, the exception is inapplicable. The Court noted that although the duty to defend may not appear on the face of the claims asserted against RD&M, there is still a possibility that the claims asserted could be covered under HGS policies. Primarily, the court found that the duty to indemnify only applies to claims that are actually covered under the policy, and several factual determinations necessary to determine whether the claims are covered or excluded under the HGS policies remain unresolved. Thus, the court decided to dismiss the HGS’s indemnity claim because it was not ripe for adjudication.

In regard to the second issue, the court found that HGS plead sufficient facts and allegations in its Amended Declaratory Judgment under the liberal pleading standards to support a finding that it does not have a duty to defend. The court mentioned that even though HGS’ Amended Declaratory Judgment is somewhat vague and lacking in factual background as to why coverage is precluded, HGS met the liberal pleadings standards and provided RD&M with sufficient notice of HGS’s assertion that it had no duty to defend the claim.

This case is a reminder that federal courts are not in agreement with Louisiana state courts that allow third party indemnity claims to be maintained and pursued even though the ultimate decision on indemnity is not ripe until liability is established.