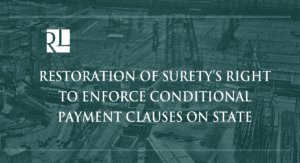 This article was written by a Riess LeMieux partner and was published in the September 2019 Surety Claims Institute’s newsletter.

A discernible shift has emerged in the last decade in favor of sureties asserting conditional payment clauses as a defense to payment bond claims on state public projects.  For more than a half-century, state and federal courts almost universally ruled that a surety could not enforce its principal’s pay-if-paid or pay-when-paid clause in defense of a claim against the bond.  To this day, federal courts continue to neglect traditional suretyship principles in favor of the public policy underlying the Miller Act on federal projects. But in the last ten years, courts applying state law have increasingly acknowledged the right of a payment bond surety, as secondary obligor, to raise a conditional payment clause as a defense.  This article examines a recent wave of decisions that may foreshadow a restoration of traditional suretyship defenses on the state level. 1

It is a fundamental precept of suretyship that the payment bond surety’s liability can be no greater than that of the principal obligor. 2 The common law has long recognized that the surety may raise, as a defense to a payment bond claim, any defense available to the principal obligor, except personal defenses.3 If a general contractor has a valid defense to payment to a subcontractor based upon a conditional payment provision in a subcontract,4 the surety should also be able to assert the defense even if the principal chooses not to raise the defense.5  Regrettably, many courts disregard this bedrock suretyship rule when analyzing a payment bond surety’s liability where the principal obligor has a valid contract defense based upon a pay-if-paid or pay-when-paid provision.

The passage of the Miller Act in 1935 created a tension between traditional suretyship principles and the public policy of ensuring payment to subcontractors and suppliers that perform work or provide materials on public jobs.  The Miller Act “represent[ed] a congressional effort to protect persons supplying labor and material for the construction of federal public buildings in lieu of the protection they might receive under state statutes with respect to the construction of nonfederal buildings.”6 The purpose of the Miller Act is “to provide a surety who, by force of the Act, must make good the obligations of a defaulting contractor to his suppliers of labor and material.”7

Every state subsequently passed its own version of the Miller Act, known colloquially as a “Little Miller Act,” sometimes bringing the statutory regime in conflict with suretyship principles.  Like their progenitor, the Little Miller Acts were enacted to protect subcontractors and suppliers from the risk of nonpayment on state public projects. The public policy promoted by these statutes often came into sharp conflict with suretyship law—to the extent it has been recognized at all—when a payment bond surety raised a conditional payment clause as a defense.  Until recently, most courts answering the question have concluded that the public policy of ensuring payment to subcontractors and suppliers trumps the contractual rights of payment bond sureties.

A review of the case law reveals that most state and federal courts have skewed towards well-meaning public policy arguments and eschewed—or completely ignored—traditional principles of suretyship.8  Within twenty years of the Miller Act’s passage, federal courts began to hold that the purpose of the statute would be thwarted if a payment bond surety were allowed to enforce a conditional payment provision in a subcontract.9  Over the next fifty years, a majority of state and federal courts held that sureties were barred from raising such a defense under state or federal law.

Federal courts addressing the issue in a Miller Act context have consistently held that a payment bond surety cannot assert a conditional payment clause as a defense.10  This holds true today.  The rationale underlying these rulings is that the liability of the surety is “coextensive with the contractual liability of the principal only to the extent that it is consistent with the rights and obligations created under the Miller Act.”11  As the argument goes, precluding a subcontractor from recovering against a payment bond due to a conditional payment clause would effectively forfeit the claimant’s Miller Act rights.  Consequently, the courts ruled that the public policy protecting claimants outweighs traditional suretyship principles and freedom of contract.

Most courts followed suit in cases involving Little Miller Acts.  With few exceptions, courts found that the public policy reflected in the Little Miller Acts superseded the contractual right of a surety to assert a conditional payment clause as a defense.12 In an oft-cited 2000 decision applying state law, the Fourth Circuit succinctly explained the prevailing majority view:

On the contrary, the very purpose of securing a surety bond contract is to insure that claimants who perform work are paid for their work in the event that the principal does not pay. To suggest that non-payment by the Owners absolves the surety of its obligation is nonsensical, for it defeats the very purpose of a payment bond.13

A handful of courts bucked the national trend, holding that a surety could assert a pay-if-paid or pay-when-paid clause as a defense to a Little Miller Act claim.14  Even in those cases, however, some courts ruled for the surety by weighing competing public policies, not out of deference to suretyship principles.  For example, the Supreme Court of West Virginia concluded that “the public policy of freedom of contract is more compelling and outweighs the public policy found in [the Little Miller Act].”15  Nevertheless, a solid majority of state and federal courts continued to elevate public policy concerns over traditional suretyship rules.

On both ends of the spectrum, an important consideration that has been overlooked by nearly all courts addressing this issue is how these rulings impact the principal’s contractual rights, particularly the effect of the general indemnity agreement (GIA).  That subject is beyond the purview of this article; however, it could be argued that if a surety is not permitted to assert a pay-if-paid clause as a defense, the surety is not the only adversely affected party. Under the terms of the GIA, the principal will ultimately be on the hook for payments made by the surety when the principal did not owe the obligation to the claimant.  This circumvents the bargained-for pay-if-paid clause in the principal’s agreement with the claimant. From the principal’s perspective, the public policy favoring freedom of contract is disregarded and the principal’s contractual rights are effectively rendered meaningless by the public policy favoring the claimant.

What a Difference a Decade Makes

It appears the trend has reversed in the last ten years to the benefit of sureties, as more state and federal courts have come around to the view that public works payment statutes—though liberally construed—should not be interpreted to abrogate suretyship principles or the right of parties to enter contracts freely.  At least six courts have explicitly acknowledged that a payment bond surety can assert the defense of its principal to enforce a pay-if-paid or pay-when-paid clause.16 The states where the pro-surety view has taken root include Arkansas, Indiana, Kansas, Michigan, New Jersey, and Pennsylvania.

Most of these decisions relied on traditional suretyship principles. For example, in BMD Contractors, Inc. v. Fid. & Deposit Co. of Md.,17 the Seventh Circuit issued an insightful opinion adopting the minority position.  The BMD court examined the history of courts denying sureties the right to rely upon a conditional payment clause.  In applying state law, the BMD court rejected the reasoning of another federal appeals court, concluding that a payment bond surety could rely on a pay-if-paid clause:

The clear trend of recent caselaw bolsters the basic principle of Indiana law that a surety may assert all the defenses of its principal. Fidelity, no less than [the general contractor], may rely on the pay-if-paid clause in the . . . subcontract to defend against this suit on the payment bond.18

In another well-reasoned decision, the U.S. District Court for New Jersey rejected the majority view, finding that public policy concerns do not override the rights of payment bond sureties:

In addition, underlying surety and contract principles are not trumped by the public policy considerations reflected in these decisions…. Similarly here, if the Court were to depart from those principles, it would erode and abrogate the state’s established surety law.19

Conversely, few courts in the last ten years have adhered to the majority view.  No doubt a handful of state courts still rely upon the established jurisprudence by prohibiting payment bond sureties from asserting such a defense on a state public works claim.20  And there have been no federal appellate court decisions in the last decade to buttress the longstanding holdings of earlier federal district and appellate courts that established the majority approach.  In concert with the recent decisions benefiting payment bond sureties, the dearth of adverse court decisions may portend good things to come.

There has been no such shift among courts applying the federal Miller Act, which have “uniformly held that sureties cannot assert pay-when or pay-if paid clauses in subcontracts” when a claim is made against a payment bond on a federal project.21  That, however has not prevented more and more courts from allowing sureties to raise the defense in response to Little Miller Act claims.  It remains to be seen if state and federal courts will continue to build on the momentum from the last decade and reinforce the payment bond surety’s traditional right to assert the defense.  If the trend holds true, a restoration of the payment bond surety’s rights may already be well under way.